Welcome to the Judaism Wiki! 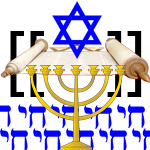 Judaism is the religion of the Jews. It is the first monotheistic religion and source of today's most popular monotheistic religion, Christianity. Judaism centres around the study of a text called the Torah ("Law" or "Teaching") through many historical texts that were written in continuation of its portrayal of Jewish life and in response to its religious laws and principles, starting with Nevi'im ("Prophets"), Ketuvim ("Writings"), Mishnah ("Doctrine"), Talmud ("Study"), and innumerable Rabbinical texts written all over the world during 2,000 years of Diaspora. Torah, Nevi'im and Ketuvim are generally referred to as "the Bible", or "the Tanakh" (Hebrew acronym of the three books), and by non-Jews it is sometimes referred to as "the Old Testament" or "the Hebrew Testament".

According to Wikipedia, Judaism is the world's eleventh largest organized religion with about 14 million adherents (as of 2006).

This site is for sharing information about Jewish history, customs, culture and traditions. We are sharing our different ways of practicing Judaism and exploring the different cultural developments. Please feel free to contribute your favorite Jewish holiday traditions or family celebrations or to add to the articles about the texts or religious practices.

Some ways you can participate:

Retrieved from "https://judaism.wikia.org/wiki/Main_Page?oldid=8365"
Community content is available under CC-BY-SA unless otherwise noted.