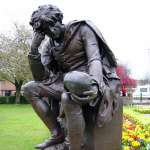 My name is Simon Peter Hughes, please call me Simon. I'm one of the admins on The Judaism Wiki and on eight other wikis too.

I'm from England. I was born in 1973 in Stratford-upon-Avon, the hometown of William Shakespeare. I studied French and Spanish at university and then gained an MA in English language teaching. I have taught English as a foreign language since 1997, I have lived and worked in Turkey, Poland, Japan and Taiwan. I have been living in Taiwan and teaching English to children since 2003.

I edit several other wikis including Wikipedia under the same username. I have edited articles in languages other than English and, through Wikipedia's multilanguage versions I have discovered that I can read Ladino without much difficulty.

My favourite book is The Joys of Yiddish by Leo Rosten. Now that's funny!.

Retrieved from "https://judaism.wikia.org/wiki/User:Simon_Peter_Hughes?oldid=11232"
Community content is available under CC-BY-SA unless otherwise noted.